Arsenal give Aubameyang, Partey update ahead of Chelsea clash

Arsenal are set to face Chelsea in a London Derby.

The Premier League encounter is scheduled for the Emirates Stadium on Saturday, December 26th.

Arsenal issued a statement about the recovery of captain Pierre-Emerick Aubameyang and midfielder Thomas Partey.

About Gabonese Aubamenyang, the statement said, “Right calf. Sustained a slight calf strain in training last week. Auba is working hard with our medical team in order to regain full fitness as soon as possible. Has now joined outside drills and will continue to be assessed regarding availability ahead of Saturday.” 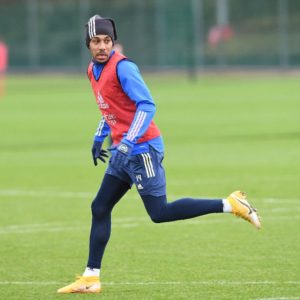 About the Ghanian Partey, the statement said, “Left thigh. Sustained a thigh strain during Tottenham Hotspur (a) on December 6. Thomas is currently unavailable, but is progressing well to now working outside on close ball work, together with the continued focus on his overall fitness rehabilitation.”