Aubameyang the hero as Arsenal reach Europa League round of 16

The Gunners played out a 1-1 draw with Benfica in the first leg and needed a result at the Emirates Stadium to go through. 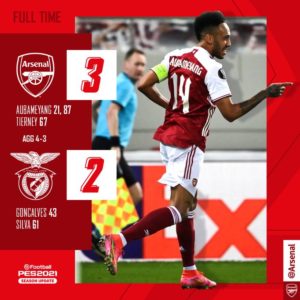 Captain Pierre-Emerick Aubameyang put the Gunners in front but Diogo Goncalves equalized as both teams went to the halftime break level.

In the second half, Rafa Silva scored to put Benfica in front but Kieran Tierney equalised for Arsenal.

Pierre-Emerick Aubameyang would score the winner as Arsenal progressed to the Europa League round of 16.