The round of 16 draws for the 2020/2021 Uefa Champions League draw have been concluded and offers some tantalizing fixtures for fans to look forward to next year.

Some of the fixtures in the draw brings back old memories while one or two looks balanced while others have what might eventually lead to upsets written all over it.

Defending champions, Bayern Munich will have to get last Lazio in the second round to the dream of defending their title in Instanbul alive. Lazio finished second behind Borrusia Dortmund in Group F with 10 points while the Bavarians expectedly finished top of their group with 16 points. This will the first time the teams will be facing off in the Champions League and it should be a very good watch considering both teams play a very enticing brand of football and they both have hot terrific strikers – Robert Lewandowski – Bayern Munich and Ciro Immobile – Lazio.

The last time Barcelona took on PSG was in the second round of the 2016/2017 season of the competition and it ended in a 6-1 thriller at Camp Nou which saw the Catalan giant qualify 6-5 on aggregate. It should be an interesting encounter even though teams at the moment have had a quite inconsistent season so far. On the flip side,  Messi reunion with Neymar is under threat as the later picked up an ankle injury in PSG’s home loss to Lyon on Sunday. 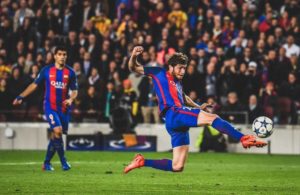 2012 Champions, Chelsea have a herculean task on their hands as they take on 2016 finalist, Atletico Madrid. Chelsea has not progressed beyond the round 16 in their last four attempts but Frank Lampard’s side with a look to erase that dent at the expense of Diego Simeone’s Rojiblancos who have only failed to progress beyond this stage once in their last six Champions League seasons.

Juventus have a tricky tie on their hands as they play 2004 Champions, FC Porto who are yet to appear in the final since then. Cristiano Ronaldo will look to carry Juventus not just into the second round but also the final in his third attempt with the club. Juventus got knocked out at this stage last season by Lyon while FC Porto made it to the quarter-finals before losing scandalously to Liverpool.

Other enticing fixtures in the round include: