Super Eagles of Nigeria forward Moses Simon was on target for Nantes as they played out a 1-1 draw at home against Dijon in a French Ligue 1 encounter played on Sunday, December 13th.

This was the first game for Moses Simon with a new coach after they fired their boss last week.

Simon would put Nantes in front when he converted a penalty in the 24th minute which they took to the halftime break.

Dijon would fight back to score an equalizer in the 54th minute when Moussa Konate converted a ball by Ibrahim Didier Ndong. 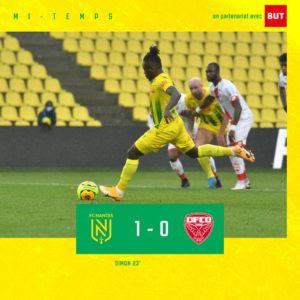 Dijon would hold on as Nantes could not find a winner as the game ended in a draw.