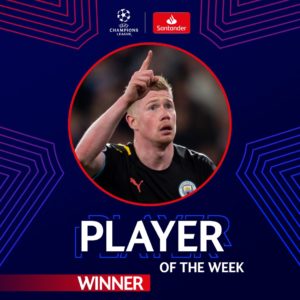 De Bruyne was the Man of the Match in the biggest game of the week which saw Premier League champions Manchester City defeat Spanish giants Real Madrid away from home.

De Bruyne provided the equaliser for Gabriel Jesus and eventually scored the winner from the penalty spot to give Manchester City a massive first leg advantage. 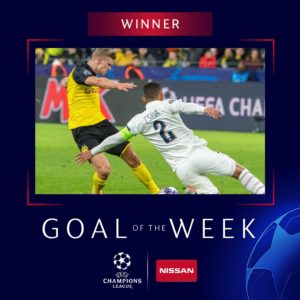 Haaland scored both goals for Dortmund as they beat Paris Saint Germain.

It was his second strike that won the award ahead of Dries Mertens curler for Napoli against Barcelona also Atalanta duo Josip Iličić’s strike and Remo Freuler’s scorcher both against Valencia.