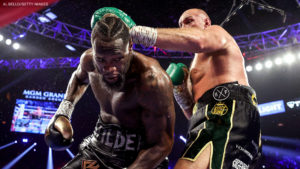 Former World Boxing Council (WBC) heavyweight champion Deontay Wilder has issued a rallying cry of war to Tyson Fury ahead of a trilogy fight between the two of them.

Fury knocked out Wilder in the seventh round to claim the WBC and Ring Magazine titles and also defend his lineal claim.

Wilder who issued an excuse of the weight of his costume has now spoken since he tasted defeat for the first time in his professional career.

Wilder posted a short video clip on his social media handles encouraging his supporters to be hopeful all but confirming there will be a third fight.

‘Your king is here. And we ain’t going nowhere, for the war has just begun.

‘I will rise again. I am strong. I am a king, you can’t take my pride.

‘I will be back. We will hold our heads up high. Your king is in great spirit.

‘We will rise like a phoenix from the ashes and regain the title.

‘I’ll see you in a few months, for the war has just begun. All my love to all my people.’