Do you sleep with the ball or your wife, coach asks Man United’s Bruno Fernandez? Find out his answer in this article….👇

“Do you sleep with the ball or your wife?” former Sporting Lisbon coach Jose Peseiro used to ask Bruno Fernandes. An appropriate question to a man who has dedicated his life to football and family.

Given the remarkable impact the 26-year-old has had made since joining Manchester United in January 2020, it is odd to think that as an 18-year-old he was sold by Boavista, a team languishing in Portugal’s third division, to Italian Serie B side Novara before he had played a senior game.

It was an inauspicious start for a player who has scored more goals than anyone else in the Premier League since his arrival at Old Trafford, and who has had an astonishing 11 more goal involvements (54) in that period than his closest rival, Harry Kane.

As Fernandes headed to Novara in the north west of Italy, he did so with 50 euros tucked into his suitcase by his mother in case of emergencies. It reflected the fact he would be earning minimum wage with his new team.

But, even then, those who knew Fernandes did not doubt bigger and better things were to come.

‘You felt he could be something special’

Born in Maia, on the outskirts of Porto, Fernandes’s talent was spotted early by Boavista and he joined them at the age of 10. One of his early opponents was Goncalo Paciencia, now a Portugal striker who started playing against his friend on dirt pitches in the city for rivals Porto.

“Bruno was not the same Bruno as today,” Schalke striker Paciencia tells BBC Sport. “But he always had something special. He played in central defence, as a winger, midfielder and he played so well in every position you felt he could be something special. 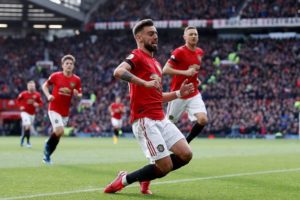 “We all expected Bruno would reach this level because as his friend I know his mentality. Bruno always thought ‘I am the best, I can do it’. The difference between Bruno and the other players is his mindset.”

“When I gave him advice and help, in training or in a game, he always gave his opinion in return with respect,” says Martelinho, who fondly recalls a long-range 90th-minute free-kick Fernandes scored for the U19s against Feirense, reward for staying behind every day after training to practise.

“At that time he was a leader already. He was very demanding with himself and his team-mates. He was a humble kid, he enjoyed listening to his elders and he lived for the family.”

Going from boy to man in Italy

With Boavista short on money and prospects, the move to Novara was a bold one. It meant missing out on time with the junior national team but, required to adapt to a new club and country, he soon showed what he could do and was given chances in the first team, earning a move to top-flight Udinese a year later.

When he did return to Portugal to play for his country, the change was obvious. Fernandes had gone from boy to man.

“I knew Bruno from before and I knew he would grow up to be a better footballer but when he came back I thought ‘oh my god, this guy is unbelievable,'” says Paciencia. “He came back stronger – something changed when he was 18 or 19. It was at this time we felt Bruno was different.”

“There are different types of leaders, some who talk, some who set an example to follow and some with encouragement – Bruno is a mix of all three,” Paciencia says.

“He is a natural leader because of his quality and he can push a team forward. It is not normal for a midfielder, a number eight or number 10, to do that the way Bruno does. He is not a John Terry or Paolo Maldini-type leader.

“Bruno is a funny guy, someone who is always joking with everyone. He is a captain because of his quality. People see him in training and on the pitch, he always talks and he has this quality. I think this is one of the secrets of the past year.”

Living for football in Portugal and a terminated contract

For all his development, Fernandes was far from being a star. He would leave Udinese for a year on loan at Sampdoria before, five years after departing for Italy, returning to his homeland.

Finally, in 2017, he made his first professional league appearance in Portugal, for Sporting.

“In Portugal, Bruno was never given much credit or column inches when he was at Sampdoria and Udinese, but then he came to Sporting and they thought ‘oh my,” Paciencia says. “I remember his first game for Sporting against Vitoria Guimaraes and everyone was like ‘wow, who is this guy?'”

Peseiro, a former Real Madrid assistant, was brought in to stitch back together a broken team, with Fernandes showing his character by returning to the club and accepting the same wages as before, while others asked for increases.

“Normally when training finished, he’d have lunch in the club and then he would go to watch the U19s or U23s play,” says Peseiro. “He liked to see the matches more than the others. He wanted to see the new, young players and speak to them to learn who they are and what they are doing on the pitch. He liked too much to see football. He lives for football.”

Despite by now being a full international and attracting interest from clubs across Europe, Fernandes’ work ethic never changed. At Sporting he scored 39 goals in 83 league games from midfield but would spend more time on the training ground than any other player.

‘A fantastic deal for Manchester United’ 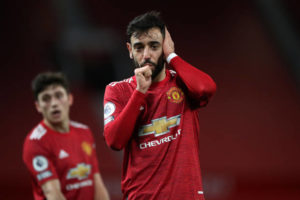 When Fernandes joined Manchester United for an initial £47m just over 13 months ago, few could have predicted the impact he would make.

In his first 40 Premier League appearances he amassed 40 goal involvements (23 goals, 17 assists), more than any other Manchester United player in Premier League history in that same timeframe.

His 23 goals have been worth 15 points to United – a tally bettered only by Liverpool’s Mohamed Salah (18).

And only five players have scored more goals for a team in one of Europe’s top five leagues in that period than Fernandes.

Not bad for a player who is not an out-and-out striker. 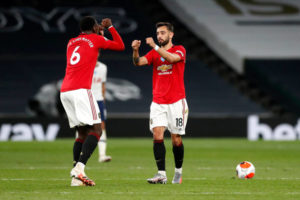 “In my opinion, it was a fantastic deal for Manchester United,” says Peseiro. “He is not an expensive player. It’s cheap if you compare the money United paid for him to the performances, the goals, the assists he has provided and how he has improved the team.”

Paciencia adds: “Even Ronaldo was not the same – when he arrived at United he needed more time. I think everyone has to be proud – I am not talking as a friend but as a Portuguese and a fan of football.

“It is unbelievable to come from Sporting, considering the difference between Portugal and the Premier League and to do what he has done. It is crazy.”

None of the fanfare is likely to go to his head, though.

“He is a family man,” Paciencia says. “He likes to go for a good dinner a lot. He doesn’t like to be a big star, to go to fashion shows or something. He likes things simple and it makes him very special because he has always been the same person.”

Regardless of the success, Paciencia knows his old friend will never change. “He is still the same person… just with more money!”