Etim Esin: Birthday tribute to the “African Maradona” at 54!

Do you remember the exact place you were that day in 1987 when news came in that Etim Esin had been shot by armed robbers?

I was in high school.

Infact, I was on the school football pitch when my classmate Newton Ogu walked up and said “Etim Esin is dead.”

He said “well, I heard he was shot by armed robbers.”

We didnt have too much access to “breaking news” in those days.

I rushed down to the staff room to look for my teacher Mr Olaniyi who always bought Daily Times, Nigeria’s then biggest and unarguably most authoritative newspaper.

I asked him if the news was true.

He pushed the newspaper he was reading at me and I saw the big banner headlines.

Attacked by armed robbers, Etim survived but it was doubtful if he was going to make the Flying Eagles team to Chile ’87 U-20 World Cup which was just a few weeks away.

While I was relieved that he was not dead I still felt the prospect of him not making the World Cup was a big disaster.

So I didn’t know whether to thank God that he survived or not.

A half-fit Etim finally made the World Cup team but it turned out to be a disaster as they came back with the worst result of Nigeria’s participation at that competition since we debuted in 1983.

Supremely gifted, he had something extra each time he was on the ball.

He was nicknamed “African Maradona” for a reason.

Former Super Eagles striker Charles Okonkwo once said Etim Esin was one of the few players who would effortlessly make the Nigerian team of any generation.

If you know Charles as much as I do, because he chooses his words very carefully, that is not faint praise. 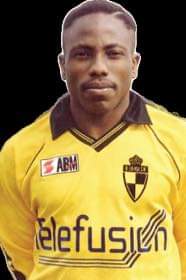 And the late Stephen Keshi, one of Nigeria’s best ever offensive defenders also said:

“In 1989, we had Etim Esin and we relied so much on him. The Super Eagles team was built around him because he had so much skill and had so much to offer. So we said this is our “Diego Maradona” in Nigeria because he can do anything with the ball. It was like he was born with the ball.”

If we had better records keeping and a decent video archive, today’s millenials would have a good idea of who this guy really was.

He never fulfilled his massive potentials through youthful exuberance. He made lots of mistakes, yea.

He went on to play in Belgium for a number of teams most notably Lokeren and Lierse as well as a short-lived international stint with the Super Eagles before his career was cut short by an alleged rape case for which he was convicted.

He escaped to Nigeria to avoid going to prison but he was not able to play at the highest level again until he retired.

He once told me in an interview: “I think I was exposed to success at such an early age and it messed up my head. I was riding a Peugeot 505 by 1986, two years after I left secondary school. I had more money than I ever imagined and people ready to do whatever I needed. I felt I could do anything I wanted. That’s why I could leave the national team to go nite-clubbing and I was attacked by the robbers.”

Today is not a judgement of his life’s choices but to celebrate a truly Nigerian talent, one of the very best we had at the time.

It is the anniversary of his birth.

May you live the rest of your life in peace, happiness and service to God and mankind.