Everton Played out a 1-1 draw away against Burnley at Turf Moor in a Premier League encounter on Saturday, December 5th.

Burnley went in front in the third minute when Robert Brady converted a ball by Ashley Westwood.

The second half would end goalless as but sides shared a point.

After the game, Everton fans took to social media to lambast Super Eagles of Nigeria midfielder Alex Iwobi for his performance. 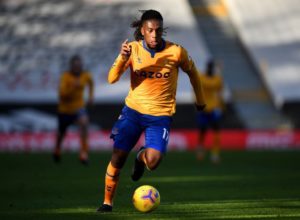 Iwobi has been utilized recently and in this game as a wing-back by Everton boss Carlo Ancelloti.

Everton fans were not delighted with his showing for 90 minutes.

Iwobi couldn't cross the ball to this if it was unmarked in the box pic.twitter.com/8q2yoWa2wJ

Iwobi getting that Drake montage ready after 60 mins of doing nothing pic.twitter.com/3uLRruR178

This Everton attack would of been crazy if they waited for Zaha and never panic buy Iwobi.

Iwobi in dangeous positions twice within 30 seconds and shows all the decision making prowess of my Mrs in the handbag section of Debenhams.