Everton striker Dominic Calvert-Lewin has emerged winner of the Premier League Player of the Month award for September.

He earned his first call-up to the senior England squad and scored on his debut against Wales. 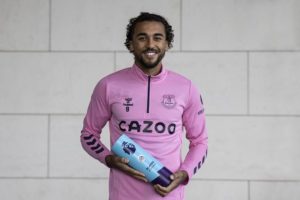 He scored against Tottenham Hotspur a hat-trick against West Bromwich Albion another goal at Crystal Palace.

Watch highlights of Dominic Calvert-Lewin below

Introducing your September @EASPORTSFIFA Player of the Month…