Chelsea suffered a 1-0 loss to Everton in a Premier League encounter played on Saturday, December 12th.

The only goal of the game came in the 22nd minute when Gylfi Sigurdsson converted a penalty.

After the defeat, Frank Lampard gave his thoughts on why his team lost.

He said, “We could have got something from the game but we weren’t unlucky, we weren’t at our best and did not do enough to break them down.

“It was not only Mendy’s mistake for the penalty as the team did not do well enough at the second ball. 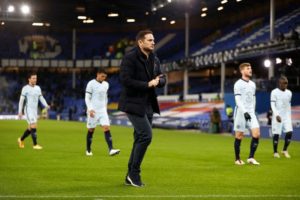 “On missing wingers today, Lampard says we did but Pulisic had to be left out due to his hamstring discomfort. He says there are muscle injuries across the Premier League and mentions again the topic of five substitutes being allowed.

On being favourites Lampard added, “I keep reading how we have the strongest squad, I don’t understand it, we are a working progress”

Watch the interviews of Lampard after the loss to Everton below

🗣"I keep reading how we have the strongest squad, I don't understand it, we are a working progress"

Frank Lampard has dismissed that Chelsea have the strongest squad in the Premier League after their 1-0 loss to Everton pic.twitter.com/gA4JHX813d