Chelsea were held to a 1-1 draw by Aston Villa in a Premier League encounter on Monday, December 28th.

Olivier Giroud converted a ball from Ben Chilwell to put Chelsea ahead.

After the game, Chelsea gave his thoughts about the game.

Accordig to the Chelsea Twitter handle, “Frank Lampard says it was a draw against a good team and on the performance, he saw some really good signs he liked but having come out of a difficult spell, it must continue. 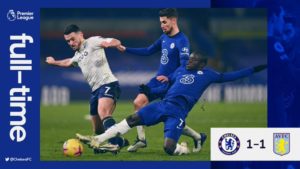 “Lampard highlights the performance of Kante and says we were good down our left-hand side. We wanted more but if we continue playing with the same attitude then we will get wins.