Gervonta “Tank” Davis lived up to his billing as he beat Leo Santa Cruz in the early hours of Sunday, November 1st.

Davis who is just 25-year-old knocked out Santa Cruz with a flush left uppercut to the chin.

The fight was close up till that point but at the 2:40 mark of Round 6 Davis produced what could be the knockout of the year. 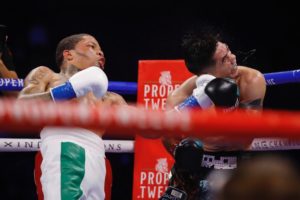 Speaking after the fight Davis A protege of retired PPV and pound-for-pound king Floyd Mayweather said, “First, I want to say, I’m a pay-per-view star. Second, I ain’t dodging nobody,” Davis said. “I’m going to continue to show the world that I am No. 1. I don’t have to call nobody out. I’m the top dog and everyone knows that. Just set them up and I’ll knock them down, one by one.”