There is news about Manchester City boss Pep Guardiola.

Guardiola is in the news after Manchester City lost 1-0 to Chelsea in an all-Premier League 2020/21 UEFA Champions League final played on Saturday, May 29th.

Guardiola has come under pressure after failing to win the Champions League since 2011. 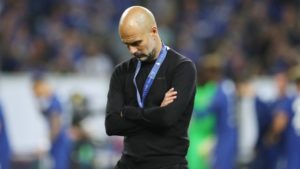 Despite spending numerous amounts of money, Guardiola has been labeled a fraud by fans

See the reactions to Guardiola below

Let it be on record that , Pep Guardiola's side had ONE short on target in a champions league final. #Fraudiola

Imagine spending £1 BILLION POUNDS in 5 seasons and not winning the CL.

Pep Fraudiola has bottled it on the biggest stage again. 😂😂 pic.twitter.com/GTGr0Ed9c1

Won a 3 champions league in a row

Zidane is The best ever manager pic.twitter.com/NyuqPTDGt4