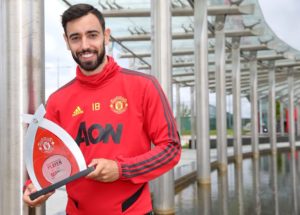 Ighalo was the winner of Manchester United Goal of the Month for March before football was suspended due to the deadly Coronavirus.

It was his strike for Manchester United against LASK in their first-leg quarter-final encounter of the Europa League that emerged winner for March.

Ighalo’s had a chance to defend his title as his goal against Norwich City in the FA Cup quarter-final was nominated for the Goal of the Month for June.

However, another January arrival Bruno Fernandes emerged the winner of the award.

The midfielders counter-attacking finish against Brighton & Hove Albion, his second strike in the game won the award ahead of Ighalo, Anthony Martial, Harry Maguire, and Mason Greenwood to win the award.

At our very, very best 🤤

Advertisement Without any iota of doubt, Odion Ighalo’s arrival at Manchester United this winter transfer window will go down has one of the best decision…

Advertisement Manchester United continued their impressive form in all competitions as they annihilated Austrian side: LASK 0-5 as they take premium control of the two…