Super Eagles of Nigeria forward Kelechi Iheanacho has won yet another award.

Iheanacho was voted the winner of the Leicester City Goal of the Month for March.

Iheanacho’s Goal for Leicester City against Burnley in the Premier League was voted winner of the award.

He took to social media to thank his compatriot Wilfred Ndidi who created the goal for him. 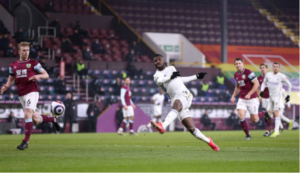 On Twitter, Iheanacho said, “What a pass @Ndidi25 wilf call me.

Watch the video of the goal by Iheanacho below

The #lcfc 𝗚𝗼𝗮𝗹 𝗼𝗳 𝘁𝗵𝗲 𝗠𝗼𝗻𝘁𝗵 for March, sponsored by @Landsail_Tyres, is… 🥁