On the 8th of April, 2008 Theo Walcott produced a spectacular run as Arsenal were beaten 4-2 by Liverpool.

The first leg ended 1-1 between the two sides at the Emirates Stadium.

In the second leg, Liverpool were 3-1 up until Walcott produced a moment of brilliance. 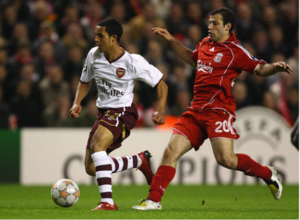 Walcott a teenager at that time produced an incredible run to provide the second goal for Emmanuel Adebayor in the 84th minute.

Liverpool would score a fourth to seal the win late in the game.

Watch the incredible run by Walcott below

On this day in 2008, @theowalcott ran the length of the pitch at Anfield to provide an incredible assist for Emmanuel Adebayor 💨 pic.twitter.com/9IgUhUSdPN