There are quite a handful of things that can keep one glued to a tv screen especially when it comes to sport; how interesting the football or basketball match is, the intrigues and controversies among others. If you’re a guy, you will most likely stay glued to your TV screen especially it Katie Osborne is presenting. Why? She is so gorgeous. 😍

Katie Osborne, in an industry that is predominantly dominated by the male folks, she has been able to have for herself a niche due to her brilliant and admiring reporting and presentation mastery. She is considered one of the best Sportscaster in the United States.

Katie Osborne is a Los Angeles-based sportscaster, who is best known for her association with Fox Sports, ESPN, NBC Sports, and Spike TV. She has worked with several top-notch broadcast companies such as Fox Sports, ESPN, NBC Sports, CBS Sports, Spike TV, and many more. She is, however, most popular for being the host of the PowerNation show on Spike TV, NBC Sport, and CBS Sports since 2016. 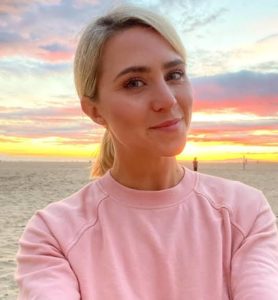 Katie Osborne was born on July 30th, 1982, in Indianapolis, Indiana, USA. She grew up in her locale where she completed her education from elementary to high school. While attending high school, Katie developed a strong desire for sporting activities and she was very involved in athletics.

She attended Iowa University but later moved to Indiana University in Bloomington a year later to where she graduated with a degree in Sports Communication-Broadcasting in 2010.

Kate Osborne has had her eye on Sports Broadcasting while she still an undergraduate. Although she took part in swimming under Novaquatics Masters and she competed in some tournaments. She was considered one of the best swimmers in Iowa during her time but her passion was in Sports Broadcasting which made her entered for internship opportunities during the holiday.

She secured her first job with the Indianapolis Motors Speedway as a client-service intern after her graduation in 2010.

Katie Osborne joined the crew as a TV host for Sports Revolution. However, the starter gig lasted only three months and she joined the Indiana Pacers’ Sports & Entertainment department as an In-Game TV host. 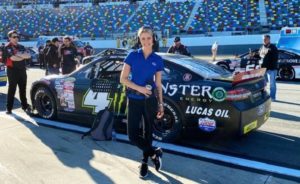 Before she left the Pacers, Katie began working as a host and content producer for IndyCar, ending both gigs in May 2011. Her broadcasting career took a short retrogression in June 2011 when she joined the clothing company, PVH, as a sales coordinator. She spent five months working in the role before returning to her broadcasting origins as a sideline reporter for Indiana Basketball in December 2011.

In 2014, Katie Osborne joined Fox Sports, working as a sideline reporter. In 2015, she began hosting PowerNation that airs on Spike TV, NBC Sports, and CBS Sports.

Katie has also been hosting Peaking on The CW Network since May 2019. On the show, she covers other races that happen throughout the year like the Red Bull Signature Series and the Forza Racing Championship.

She  hasn’t made a fortune yet in her decade-old career but she lives very comfortably. Her salary is said to be in the region of $200,000 while her net worth is stipulated to be around a million dollar. She is involved in some philanthropic work where she donates some her salary to.

In as much as she is always in front of the camera, Katie Osborne has found a way to keep her relationship away from the public space to some extent. Katie Osborne is not married yet, but she is in a relationship with Tanner Foust. 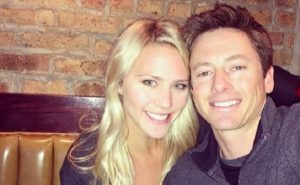 Tanner is a racing driver, stunt driver, and television host. He is also a Molecular Biology degree holder from the University of Colorado. They have been for while and they spend time together often but their plans of marriage are not known yet.

Some other facts Katie Osborne