Lionel Messi has told Barcelona he wants to leave the club this summer according to various sources.

Messi is reportedly willing to go after almost half a decade in Barcelona.

This decision comes after an 8-2 humiliation by Bayern Munich in the Champions League quarterfinal.

Barcelona confirmed that he handed in a request to leave but told him that he will stay as his free transfer clause to leave expired on June,

According to Barcelona, Messi has a 700 million euros release clause. 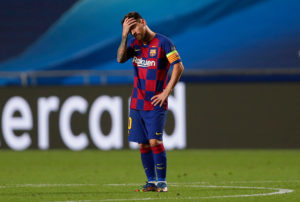 Marcelo Bechler the journalist who broke the story that Neymar was on his way to Paris Saint-Germain states that Messi wants to join Pep Guardiola at Manchester City.