Arsenal suffered a 2-1 loss to Everton in a Premier League encounter played at Goodison Park on Saturday, December 19th.

Yerry Mina converted a ball by Gylfi Sigurdsson to put Everton back in front before the halftime break. 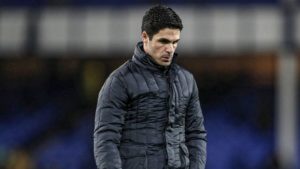 The second half would end without a goal as Arsenal suffered yet another defeat.

The result means that Arsenal’s points return from 14 games this season is their worst record at this stage since the 1974-75 campaign.

Speaking after the game Arteta explained why Arsenal lost yet again.

He said, “We created enough chances not to lose the game, the luck is not on our side”

Watch Arteta talk about Arsenal’s loss to Everton below

🗣 "We created enough chances not to lose the game, the luck is not on our side"