A Nigerian Professional Wrestler, Jordan Omogbehin who is better known as Omos has emerged as a tag team champion at Wrestlemania 37 alongside AJ Styles.

Omos, a former college basketball player, works with AJ Styles as a bodyguard before the duo stepped into the ring to defeat The New Day duo of Kofi Kingston and Xavier Woods.

Despite the potential pitfalls of accepting a match against a dominant 7-footer like Omos, Kingston and Woods quickly obliged, and the match was made official for WrestleMania.

Styles and Omos looked to gain some momentum heading into The Show of Shows the following week when The Phenomenal One faced Kingston in a single match on Raw. 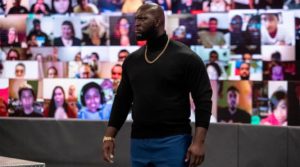 He seemed to have the advantage with Omos watching his back, but Woods proved to be the difference-maker, as he threw off Styles’ timing for the Phenomenal Forearm by playing his trombone.

That allowed Kingston to catch Styles with the SOS and pin him, marking his first pinfall loss in a regular singles match since losing to Jey Uso on SmackDown in October.

While the loss sent Styles back to the drawing board, he still found himself in an advantageous position ahead of WrestleMania thanks to the presence of Omos, who has been integral to his success in recent months.

Amos has gotten involved in many of Styles’ matches since aligning with him in October, and he finally got the opportunity to wrestle in an actual match at WrestleMania.

New Day cast doubt on whether Styles and Omos would be able to mesh as a team at WrestleMania, but they worked well as a tandem and knocked off one of the best tag teams of all time on The Grandest Stage of Them All.

Omos was born in Nigeria and played basketball for University of South Florida and Morgan State University from 2012–15 as a Center.