On the 9th of April 2009, Chelsea produced an incredible comeback against Liverpool in a first-leg Champions League quarterfinal fixture between two Premier League sides.

Fernando Torres put Liverpool in front but Chelsea would fight back.

The Blues scored an equalizer through Branislav Ivanovic who converted a corner kick.

Ivanovic will put Chelsea in front when he converted another corner kick. 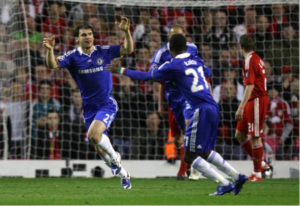 The final goal was scored through Didier Drogba to wrap up the 3-1 win.

See the video of the game below