On a might that can be described as a”Bloodbath” at Anfield, Manchester City, with gratitude to Alisson Becker,  showed no mercy as they tore Liverpool into shreds just like the great white shark does to its prey.

Alisson Becker gifted Pep Guardiola’s men two goals as the Citizens recorded their first win over the Reds at Anfield under the Spanish manager.

Raheem Sterling and Ilkay Gundogan, who could have scored a hat trick on the night were the beneficiaries of Alisson Becker’s “giveaway” on a night the Reds would want to forget in a hurry. 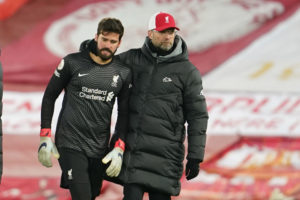 While reacting to Alisson Becker’s errors, Jurgen Klopp believes that the goalkeeper probably had cold feet. Hence, his errors which caused Liverpool the match.

Ali has saved our life plenty of times and tonight he made two mistakes, that’s how it is.

You cannot hide them now. Indeed, we didn’t give him a lot of options, especially the first one. Maybe he had cold feet or something.

Liverpool is now in fourth place with 10 points behind Manchester City who have a game in hand.