Arsenal are set to host Chelsea in the star clash of Boxing day, Saturday, December 26th.

This is not the first time the Gunners would face the Blues on boxing day.

The last time both sides clashed on boxing day was in the year 2001 at Arsenal’s Highbury stadium.

Chelsea took the lead in the 31st minute when Frank Lampard converted a ball by Jimmy Floyd Hasselbaink.

Down at the halftime break, Arsenal equalized through Sol Campbell in the 49th minute. 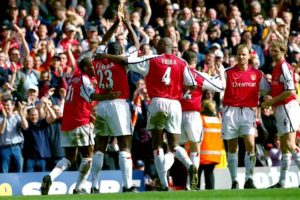 Sylvain Wiltord would convert a ball by Robert Pires in the 71st-minute t put Arsenal in front.

The Gunners would hold on for the win and eventually win the Premier League in 2002.