The first half was goalless but Arsenal would go in front when Paul Pogba caused a penalty bringing down Hector Bellerin.

Arsenal captain Pierre-Emerick Aubameyang stepped up to convert the penalty and the Gunners held on for a crucial three points. 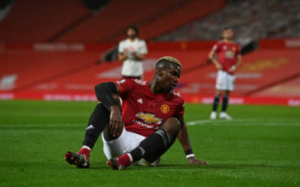 After the game, Manchester United fans took to social media to blame Pogba for the defeat as he caused the Arsenal penalty.

See what Manchester United fans are saying about Pogba below

Paul pogba we expected against arsenal vs paul pogba that showed up #ARSMUN pic.twitter.com/YYHnxo7yfb

When Pogba is asked about his performance Today pic.twitter.com/cPK2iATzB2

Pogba: "I gave away a foul like this and cost us the goal today — I am not the best defensively in the box and I can improve on that and do better." #mulive [bbc]

This is the Pogba that turned up for today's game. Struggle ekaaye 😅😅 pic.twitter.com/3uycre4lcx