After a very impressive first half, Paul Pogba gave away a penalty after the Frenchman clipped the back of Bellerin’s ankle in the box and Pierre-Emerick made no mistake as he sent David De Gea the wrong way to give Arsenal the only goal of the game in the 68th minute.

Paul Pogba was the villain on the might as he not only gave away the penalty, he also had a terrible game as he failed to have a meaningful impact in the entire duration of the game.

Manchester United home form in the league deepens as they have now lost three of their last four home games in the league this season.

Here are things to note as Arsenal records a famous victory at Old Trafford; 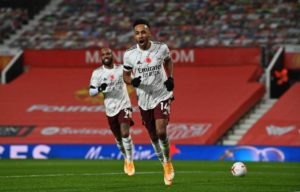