Super Eagles midfielder Wilfred Ndidi has given his thoughts after his Leicester City side recorded a 2-0 away win against Tottenham Hotspur in a Premier League encounter played on Sunday, December 20th.

An own goal by Toby Alderweireld gave Leicester City a two-goal advantage.

Ndidi received a yellow card in the game but He made 19 ball recoveries – the most by any player in a single Premier League game in over a year. 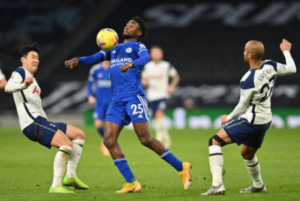 Kelechi Iheanacho came into the game to replace Vardy.

After the game, Ndidi took to his official Instagram account to give his thoughts about the game.

The message on his Instagram account said, Amazing feeling to get 3 points and a clean sheet away from home