Manchester United boss Ole Gunnar Solskjær has expressed disappointment after his side played out a 3-3 draw against Everton in a Premier League game played at Old Trafford on Saturday, February 7th.

Everton came back from two goals down and needed a 95th-minute strike to earn a point.

Speaking to the Manchester United website after the game, Solkjaer gave his thoughts on the game. 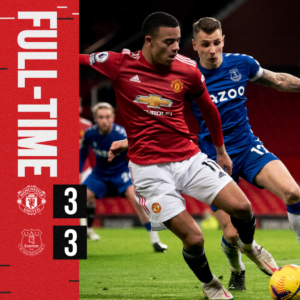 He said, “Yeah, especially after the way we played the last 40 minutes. They scored two goals early on in the second half and you almost sit back and want to see the reaction, see how the players handle this challenge.

“They did magnificent, played some fantastic football, scored a goal, should’ve scored a few more. We didn’t really feel threatened at all down there but, of course, with the size they’ve got, you can never ever be sure. We just got a minute to play out and we did not manage it.”