Super Eagles of Nigeria defender Semi Ajayi was on target for West Bromwich Albion as they played out a 1-1 draw against reigning champions Liverpool at Anfield in a Premier League encounter played on Sunday, December 27th.

Sadio Mane converted a ball by Joel Matip in the 12th minute to give Liverpool a lead till the halftime break.

West Bromwich Albion would find an equalizer in the 82nd minute when Semi Ajayi converted a ball by Matheus Pereira. 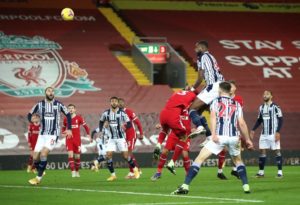 It was Semi Ajayi’s first Premier League goal from his first attempt on target in his 14th appearance in the competition.

West Bromwich Albion would hold on to claim a point against the champions pivotak for them to survive relegation.