Messi now has 117 goals in the Champions League which makes him second behind Cristiano Ronaldo as the top scorer in the competition but it started on the 2nd of November 2005.

It was a group stage encounter between Barcelona and the Greek side Panathinaikos.

Messi then intercepted a back pass and scored the third for Barcelona before Eto’o added the fourth at the halftime break. 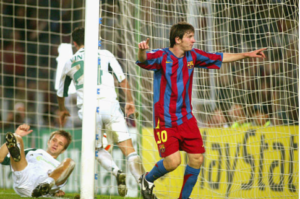 Eto’o would then complete his hattrick with his second goal of the game as Barcelona beat the Panathinaikos 5-0 at the Camp Nou in front of 75,000 fans in Attendance.