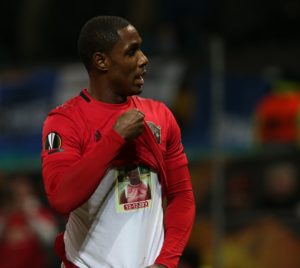 Former Super Eagles striker Odion Ighalo scored his first goal for Manchester United as they beat Club Brugge 5-0 at Old Trafford in the second leg of their round of 16 Europa League clash played on Thursday, February 27th.

Since he joined he did bit score in previous games against Chelsea, Watford and the first leg against Club Brugge in Belgium.

He was handed his first start by Ole Gunnar Solksjaer and he made it count.

After Bruno Fernandes had given Manchester United the lead from the penalty spot, Ighalo scored in the 34th minute from a Juan Mata assist.

Scott McTominay added a third before halftime with Fred scoring two goals in the second half to complete the demolition.