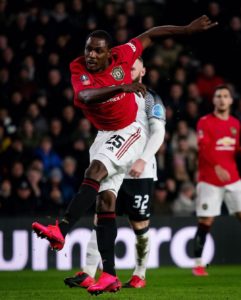 Former Super Eagles of Nigeria forward Odion Ighalo was again among the goals as Manchester United beat Derby County 3-0 away in their fifth round FA Cup clash away from home on Thursday, March 5th.

After Luke Shaw broke the deadlock in the 33rd minute, Ighalo scored the second in the 41st minute to give Manchester United a two goal advantage going into the halftime break.

Ighalo made it three in the 70th minute with his second strike of the game. Manchester United progressed to the quarterfinals where they will face Norwich City.

Here are the highlights below