Spanish La Liga side Barcelona recorded a 2-0 win against Italian Serie A side Juventus in their Champions League group stage encounter played on Wednesday, October 28th.

A goal by Ousmane Dembele in the 14th minute and a second-half penalty by Lionel Messi gave Barcelona the lead.

Here are three things we need to know about the game

1 Álvaro Morata, who has had three goals ruled out for offside tonight against Barcelona, has been caught offside 13 times in the Champions League since the start of last season 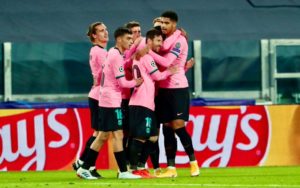 2 Since Lionel Messi’s first Champions League campaign in 2004-05, only Cristiano Ronaldo who has 38 has provided more assists in the competition than the Argentine who has 35.

3 Pedri Gonzalez only cost Barcelona €5 million and the 17-year-old dominated Juventus with the confidence of a seasoned star.