Chelsea recorded their first win of the 2021 UEFA Champions League with a 4-0 win away against Krasnodar on Wednesday, October 28th.

The Blues won the game thanks to goals from Christian Pulisic, Callum Hudson Odoi, Hakim Ziyech and Timo Werner.

1. Christian Pulisic is the 13th different player to score for Chelsea across all competitions this season, with the Blues having more unique scorers than any other Premier League team so far this campaign

2 Hakim Ziyech has been directly involved in 13 goals in his last 15 starts in the Champions League, scoring six goals and assisting a further seven. 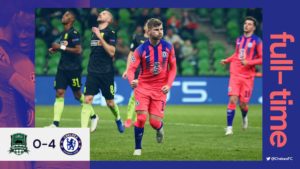 3 – All eight of Timo Werner’s Champions League goals have come away from home – he’s the top scorer in the competition to have scored 100% of their goals on the road.

4 – Callum Hudson-Odoi is just the second teenager to score for Chelsea in the Champions League, after Reece James did so against Ajax last season. Cobham.