AFCON2021Q: See where the Super Eagles will take on Lesotho

The venue for Super Eagles 2022 Africa Cup of Nations Qualifiers returns leg fixture against the Crocodiles of Lesotho has been confirmed.

For the first time in more than a decade, the Super Eagles will return to Lagos for an international match and the newly-renovated Teslim Balogun Stadium has been picked to most the tie according to a top source

Teslim Balogun Stadium has been under renovations for the past few months with structural adjustment as well as the laying of a brand new grass pitch. 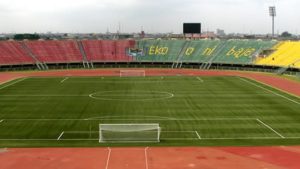 The last time the Super Eagles played at the venue was in 2011 against Sierra-Leone in an International friendly match which ended 2-1 in favour of then Samson Sia Sia-led side.

The team will look to do the double over the Southern African nation after the first leg ended 4-2 in favour of Gernot Rohr’s men in November 2019.

The return leg is slated for next month with no time and date fixed yet.