You will agree with me that “There is nothing hidden under the sun” especially when it comes to the lives of celebrities or socialities if you may.

In as much as some of them are skilled in the prestigious “art” of staying off the social media space or concealing some details about themselves, others have fallen into the “trap” which is why a topic like “Zendaya feet” becomes an interesting one to talk about.

You can’t but agree with me again that no one, perhaps just a very few individuals would be interested in talking about my feet or probably yours if you are a “nobody” like me…Lol.

But don’t be surprised if you see two or three fans gathered at a subway station arguing religiously about Zendaya feet. The reason is not far-fetched, she is one of the biggest movie stars in Hollywood.

If a soothsayer had revealed to Zendaya that “Zendaya feet” will trend on social media and become a major topic of discussion among fans online, perhaps she would have taken the “prophecy” with a pinch of salt. However, people are still talking about it to date.

In this piece, we shall be talking about who Zendaya is, her background, career, net worth as well as “Zendaya feet” which in a way increased the “brightness of the limelight she has been basking in before the incident.

We will also be sharing with how she responded to her critics on social media.

Born on the 1st of September, 1996 to Karembe Ajamu Coleman, An African American, and Claire Stoermer, a Scottish-German, Zendaya Maree Stoermer is an American actress and singer who came into limelight at a very tender age where she worked as a back-up singer and child model.

Zendaya has five siblings and she is a native of Oakland, California where she grew up. She did her basic education at Fruitvale Elementary school where her mother taught for twenty years.

She attended Oakland School for the Arts where she got some theatre appearances to her name while she was still a student. She also studied American Conservatory Theater while she was in school and she features.

Some of the plays she featured in then include; Caroline or Change, Once on this Island, William Shakespeare’s Twelfth Night, As You Like It and Richard III.

Some people got to know Zendaya because of the ” Zendaya Feet” incident but the 26-year-old superstar has been making waves in her career right from her childhood.

Zendaya’s first contact with theatre was with the California Shakespeare Theatre in Oakland.

She was a student at the theatre’s conservatory student programme for a while before she joined a hip-hop dance group called Future Shock Oakland where she spent three years.

She also joined Academy of Hawaiian Arts where she learned how to dance Hula – a kind of Polynesian dance developed in the Hawaiian Islands.

She started her career by working as a model for top brands like Macy’s, Mervyns, and Old Navy. She also featured as a back-up dancer in a Sears commercial which also featured pop American Popstar, Selena Gomez.

In 2009, she auditioned for the popular American sitcom, Shake It Up (known as Dance Dance Chicago then).

She auditioned for the role of Cee Cee Jones but she was selected as Rocky Blue instead where she performed late Michael Jackson’s “Leave Me Alone”.

Also, the sitcom, Shake It Up premiered on the 7th of November 2010 with 6.2million viewers – the second highest-rated premiere in Disney Channel’s 27-year history.

Zendaya, released a couple of songs as she showed forth her creativity diversity. Some of the songs she released include; Swag It Out, Watch Me, Something to Dance for among others.

It was during this time that she appeared in her first movie role, Frenemies in 2012.

In 2013, she was one of the celebrities that featured at the 16th season of Dancing with the Stars.

Zendaya was 16 years old as at time – the youngest contender ever to participate on the show before she succeeded by 14-year-old Willow Shields during the twentieth season of the show.

Full of excitement and nervousness as this lil movie we made in lockdown with people I love is coming out in the next hour. Nervousness for a few reasons. Normally I’m pretty self-critical and that leads me to be far too fearful to make things myself or trust myself enough to… pic.twitter.com/TEHX2zfDE3

While speaking to The Irish Times recently, Zendaya revealed that she didn’t understand acting but she got obsessed with the actors on stage.

“My mom worked at the California Shakespeare Theater since I was a kid. So I fell in love with acting because of the actors I got to see on stage every day since I was two. It was my life.

And I just was obsessed with what they were doing. I didn’t understand it. All that said, this felt like a full-circle moment for me.”

Zendaya made her first feature film in the Superhero movie, Spiderman Homecoming in 2017 where she got a handful. of positive reviews from critics.

Later that year, she appeared in the musical film, The Greatest Showman where she acted as a trapeze artist who falls in love with Zac Efron’s character during a time when mixed-race romance was prohibited.

She began starring in the HBO drama series Euphoria in 2019 which is an adaptation of the Israeli series with the same name as Rue, a 17-year-old drug stoner and the narrator of the series.

Aside from her very impressive body of work, one incident that got stuck to the narrative of her career is the “Zendaya feet” incident which made her name go viral on social media.

While some fans tend to associate with their favourite celebrities on social media otters look for the slightest opportunity to throw shades at them.

Most often than not are directed at body-shaming or the most recent, feet-shaming them. 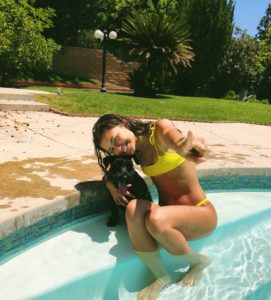 In 2018, Zendaya and her dog, Noon were having a good time near the swimming pool in her Los Angeles home and she took her Twitter page to share pictures of her and her dog whom she said is gradually overcoming the fear of water.

However, instead of that to make the headlines, Zendaya feet did. Fans trolled her feet which were underneath the water.

A few moments after her tweet, fans zoomed in into her funny-looking feet while others made a caricature of her feet in response to her tweet.

See tweets about Zendaya feet below👇

Anyone who knows Noon knows he does not fuck with the pool (so proud mom moment) he got to the first step all on his own 🤗 pic.twitter.com/SmvhharlXC

What the heck is by your toes lol pic.twitter.com/PXjfwPSF9b

I see no difference pic.twitter.com/WSZUuF7283

While majority of the comments on Zendaya feet were cruel others came in her defense which she responded to.

Y’all stop. Her feet are nicer than all of ours. pic.twitter.com/6XLmUT4wyV

The user wrote, “I bet Zendaya’s feet smell like Funyuns.”

Zendaya responded, “Let’s check, shall we?” Then the actress  immediately took her Christian Louboutin shoe off, smelled her foot, and quipped, “No, smells like success to me.”

The trolls about Zendaya feet has on her net worth, the 26-year-old is worth about $15 million.