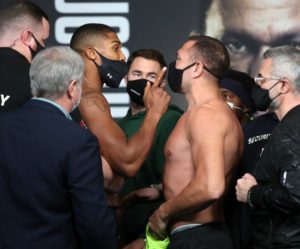 Speaking about the clash with Kubrat Pulev at the weigh-in, Joshua said “I’ve seen so many fighters talk a load of rubbish, then they get slapped up. That don’t really intimidate me. I would’ve just clapped him in his jaw there and then, but I’ve got to do it tomorrow.”