Anthony Joshua knocks out Kubrat Pulev in round 9 (video)

Joshua is the unified heavyweight champion with the WBA, WBO, IBF, and IBO boxing belts

He faced off against Pulev who is his mandatory challenger from the IBF but all titles were on the line.

The fight saw Joshua score two knockdowns against Pulev in round three.

Pulev did not quit and came back stronger in the later rounds. 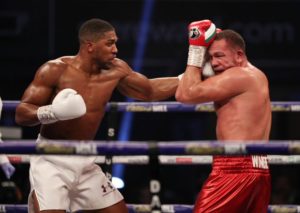 Joshua would deliver the decisive knockout in the ninth round to win the fight and retain his titles.

Watch Anthony Joshua knockout Kubrat Pulev in round nine below