Five-time world football player of the year Cristiano Ronaldo has revealed his ambition for the 2020 FIFA World Cup.

Ronaldo has won several titles at the club level and at an older age wants to make history with his country.

Ronaldo has been victorious with Portugal leading them to win Euro 2016.

He was also the leader of the team that won the 2019 UEFA Nations League.

Many believe that the 2022 World Cup will be the last time Ronaldo would play at the best competition.

He wants to make it count and win the world cup at the age of 37.

In an interview, he said, “It will be tough, but we are a good team, a young team. We have a fantastic coach [Fernando Santos], so we’re very, very, very positive on that.

“We don’t know what’s going to happen – we have to think about our group – but I think we’ll be good. Our team is better, we improved a lot, the young kids is becoming even better, so I’m very confident.” 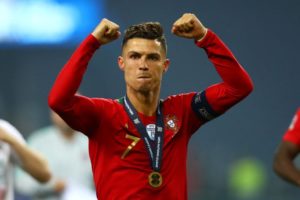 “But you have to be realistic as well. As I told you many, many times, my dream is to win something for Portugal national team and I won two titles, which is making me feel happy.