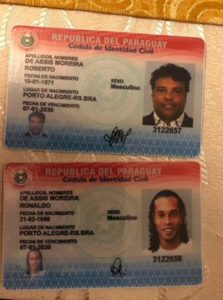 Ronaldinho and his brother have been arrested for entering Paraguay with fake passports.

Brazilian superstar Ronaldinho and his brother have been arrested for entering Paraguay with fake passports.

According to reports, Ronaldinho presented a fake passport which stated he was a Paraguay citizen, as it includes his name, birthplace, and birthdate but was false.

According to reports Ronalinho had issues with the Brazilian government which resulted in his passport been confiscated and was asked to pay $2.3m which he has not.

The decision for Ronaldinho to forge Paraguayan passports is even more bizarre especially when Brazilians do not need an identity card to visit the country.