The Pichichi trophy is the award for the highest goalscorer in the Spanish La Liga.

Speaking upon receiving the Pichichi trophy, Messi stated that he was delighted to pass Telmo Zarra who had six.

He said, “Thank you very much

“I want to say thank you again for this award 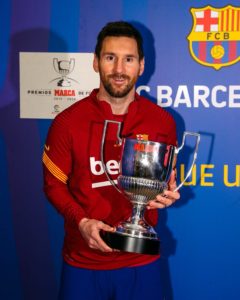 “To surpass Zarra’s record knowing what that represents

“So thank you very much for this recognition

🏆 Messi: “It’s an honor for me to surpass Zarra” pic.twitter.com/GqN192lNq5