On August 9th, 2012 the United States of America (USA) beat Japan 2-1 to win Gold in the women’s football event of the Olympic Games in London.

In a game that was a repeat of the 2011 FIFA Women’s World Cup final, USA took the lead as early as the eighth minute through Carli Lloyd.

After the halftime break, Lloyd scored the second for USA for her brace in the 54th minute.

Yūki Nagasato pulled on back for Japan in the 63rd minute to step up a tense ending to the game. 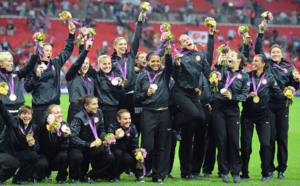 The USA would however hold on for the win and claim Gold medal in front of 80,203 fans in attendance at Wembley Stadium, London.

Watch highlights of the game between USA and Japan below