Super Eagles midfielder, Ogenyi Onazi, and former Golden Eaglet striker, Sani Emmanuel have reacted to the death of Pastor T.B Joshua, the founder of the Synagogue Church of All Nations.

Pastor T.B Joshua died on Saturday 5th June had supported the careers of a handful of Nigerian footballers including the duo. 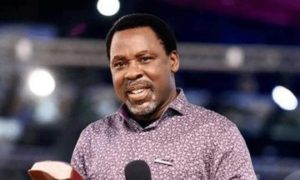 Onazi also revealed to ScoreNigeria how the late T.B Joshua prayed for him when he initially missed out on the Golden Eaglets team ahead of the World Cup which was hosted in Nigeria in 2009.

“He prayed for me and I joined his team My People’s FC, who later played in a tournament in Sweden, where we did well and I was recalled to the Golden Eaglets by the new coach of the team (John Obuh).”

Sani Emmanuel took to his Facebook page to also react to the demise of the pastor. Advertisement The General Overseer of The Redeemed Christian Church of God, Pastor Enoch Adeboye has sent a condolence message to the family of late televangelist,… Advertisement The Nigeria Football Federation (NFF) have announced the death of former Golden Eaglet and Flying Eagles goalkeeper, John Felagha who died in Senegal on… Advertisement The founder of Synagogue Church of All Nation, Pastor T.B Joshua has since been buried at his church but conversations about the life of… Advertisement The founder of Synagogue Church of All Nations, Temitope Balogun Joshua who is better known as T.B Joshua has been confirmed dead after falling…