One of the many desires of parents is to see at least one of their children follow their career or business path(s). Some parents prefer their first son or daughter to take over their establishment(s) if possible. 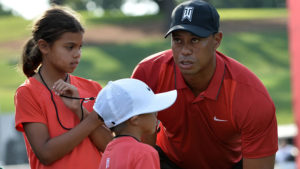 The answer to the question will be revealed in this article definitely but would you like to more about Sam Woods especially how she and her brother have been faring since their parents separated?

Being born into a celebrity family and dealing with media attention sometimes comes with a challenge or truckload of challenges in severe cases and Sam Woods, even though she is still young has experienced the good and bad sides of being a celebrity child.

If you are still reading up to this point, then we are convinced that you really want to get authentic information about Sam Woods. Permit me to congratulate that you have come to the right place. So read on!

When and Where was Tiger Woods Daughter Born?

Tiger Woods’ daughter, Sam Alexis Woods was born to the golfer and his ex-wife, Elin Nordegren on the 28th of June 2007 in Orlando, Florida a few hours after he came second at the US Open. He was 31 years old at the time of her birth.

SAM Woods was born in the early hours of that day (Monday) and her father extinguished some rumors concerning her birth in a statement via People Magazine:

“It wasn’t life-threatening or anything, but she (Sam’s mom) just had a few problems and had to be admitted”

“It wasn’t easy. It was not easy, because I wanted to be there. And the doctor and Elin said, ‘There’s nothing you can do. So go out there and just get a ‘W.’ 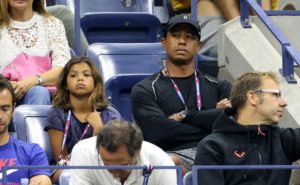 “Well, came close. But that night was infinitely more rewarding than any ‘W’ ever could have been. I flew, landed in Orlando, went straight to the hospital, and next thing you know, we have Sam Alexis in our arms.”

Tiger Woods’ daughter Sam Woods celebrated her birthday recently. So, as of 2021, she is 14years old.

Is Sam her Nickname?

Not at all, her name is Sam Alexis Woods. In an interview Tiger Woods granted shortly after the birth of his daughter, he explained that his father, Earl used to call him ” Sam” instead of Tiger while growing up. He added that his father called him “Sam” because he feels he looked more like “Sam, “:

“My father had always called me Sam since the day I was born. He rarely ever called me Tiger. I would ask him, ‘Why don’t you ever call me Tiger?’ He says, ‘Well, you look more like a Sam.” 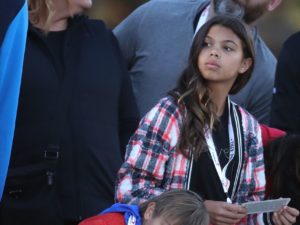 Tiger Woods went on to explain why they named their daughter Sam:

“We wanted to have a name that would be meaningful to either side of the family, my side or Elin‘s side, because she was born [the day after] Father’s Day. It just happened to fit. My father had always called me Sam since the day I was born. He rarely ever called me Tiger…”

Tiger Woods daughter is called Sam Alexis Woods in honour of his father, Earl Woods, as Woods explained just weeks after her birth during the 2007 AT&T National.

“Sam, we wanted to have a name that would be meaningful to either side of the family, my side or Elin’s side, because she was born an extension of Father’s Day, it just happened to fit.”

“My father had always called me Sam since the day I was born. He rarely ever called me Tiger. I would ask him, ‘Why don’t you ever call me Tiger?’

Does Tiger Woods have another child?

Sam Woods is not the only daughter of the veteran golfer. He also has a son, Charlie Axel who was born in 2009. Tiger Woods’ son is 11 years old.  The two of them often follow their father to golf tournaments. 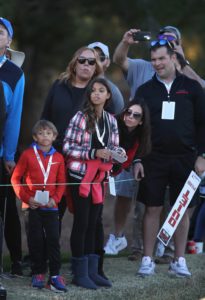 The golfer got engaged to Elin Nordegren, a Swedish model and the daughter of former minister of migration Barbro Holmberg and radio journalist Thomas Nordegren. Tiger met Elin at the 2001 Open Championship via Swedish golfer Jesper Parnevik, who hired Elin as his Au Pair.

Tiger Woods got married to Elin Nordegren on the 5th of October, 2004  at the Sandy Lane resort in Barbados. The duo lived happily with their children but their marriage crashed after six years on the 23rd of August, 2010.

Between December 2nd, 2009, and February 2010, Tiger Woods released multiple statements where he confessed to having affairs with multiple women. He also announced that he went through a 45-days therapy which started at the end of December.

“I thought I could get away with whatever I wanted to,” he said. “I felt that I had worked hard my entire life and deserved to enjoy all the temptations around me. I felt I was entitled.

“Thanks to money and fame, I didn’t have to go far to find them. I was wrong. I was foolish.”

Tiger Woods announced that he was dating Olympic Gold medalist, Lindsey Vonn. They for two years and some months before the split.

Tiger was rumoured to have dated stylist Kristin Smith between 2016 and 2017. Currently, he is said to be in a relationship with Erica Herman, a restaurant manager.

How are Sam Woods and her brother Charlie Axel faring

After the divorce, both parents agreed to joint custody of their children. So, they both spend time with their parents travelling from one point to the other in compliance with Covid-19 protocols.

Elin revealed in 2014 that the relationship she has with Tiger is tied around their kids and she admitted he is a good father.

“My relationship with Tiger is centred around our children and we are doing good – we are – and I am so happy that is the case,” said Elin in 2014. “He is a great father.”

Tiger Woods would have to hope that his unborn child or children will take up his legacy because Sam Woods and her brother Charlie Axel have already fallen in love with soccer.

When Golf.com ask Tiger Woods if his daughter Sam Woods and her brother are interested in golf, his response was sharp and direct:

“No, not really. They’re keen on soccer; if they want to play golf, that’s great. If they don’t, that’s fine, too. As long as they have a good time playing sports.”

“I find that a lot of fun now, to be able to physically get out and pass the ball around with them. I get such a big kick out of watching them compete and play. It’s so much fun to see how happy and passionate they are about soccer.”

Sam Woods and her brother, despite the divorce that rocked their parents’ marriage, have shown traits of decent upbringing by both parents. Neither of them has been involved in any form of controversy ow whatsoever. They are good kids no doubt.

In her latest appearance, Tiger Woods daughter Sam Woods looked stunning in her red mini dress and butterfly heels. The 14-year-old helped celebrate her father as one of the inductees at the World Gold Hall of Fame induction ceremony in March in Ponte Verda Beach, Fla. Susie Maxwell Berning, Tim Finchem, and Marion Hollins were inducted into the Hall of Fame, which honours extraordinary achievement in the sport.

During the presentation, Sam and Tiger’s emotions were running high, and she gave an emotional speech that brought tears to her father’s eyes. Sam presented a deeper perspective of Tiger Woods, from recalling her grandfather Earl Woods’ influential words, “train hard, fight easy,” to giving amusing anecdotes about what Tiger does in his spare time. Tiger was accompanied by Charlie, his 12-year-old son, and Erica Herman, his girlfriend.