Elon Musk is sharing memes expressing his seeming excitement to shake up Twitter as its newest board member and majority shareholder – even as the tech tycoon faces the possibility of another Securities and Exchange Commission (SEC) probe over the massive profits he reaped after delaying the disclosure of his stock purchase.

The Tesla CEO took to his social media platform Thursday morning to inform his more than 80 million followers that Twitter’s next board meeting was ‘gonna be lit’ by sharing the infamous meme of himself smoking a blunt.

Musk, 50, also made a post appearing to show the domino effect of selling his first company Zip2 – which provided and licensed online city guide software to newspapers – to Compaq in 1999 to Twitter creating an edit button.

Zip2, which is recognized as the entrepreneur’s biggest failure, sold for $307million, earning Musk $22million for his 7 percent share of the venture when he was only 27 years old. The meme seems to imply that sale spearheaded his success and allowing him to become Twitter’s largest shareholder.

The billionaire polled his Twitter following about the creation of an edit button on Monday, just hours after he was filed an SEC disclosure declaring his 9.2 percent stake in the social media platform.

Twitter has confirmed it is working on adding the feature to its interface but denied Tuesday that it was pushed to do so by Musk.

Musk’s seemingly laissez-faire attitude online comes amid speculation he may face SEC penalties after he was 11 days late in declaring his 9.2 percent stake in Twitter, during which time he earned approximately $156million in profits.

Musk is no stranger to SEC scrutiny and has been under investigation relating to potential federal securities law violations in the past. 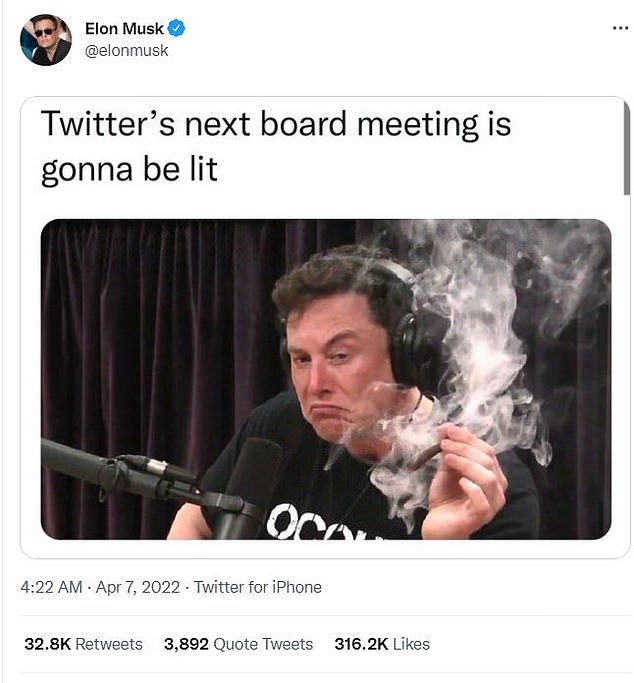 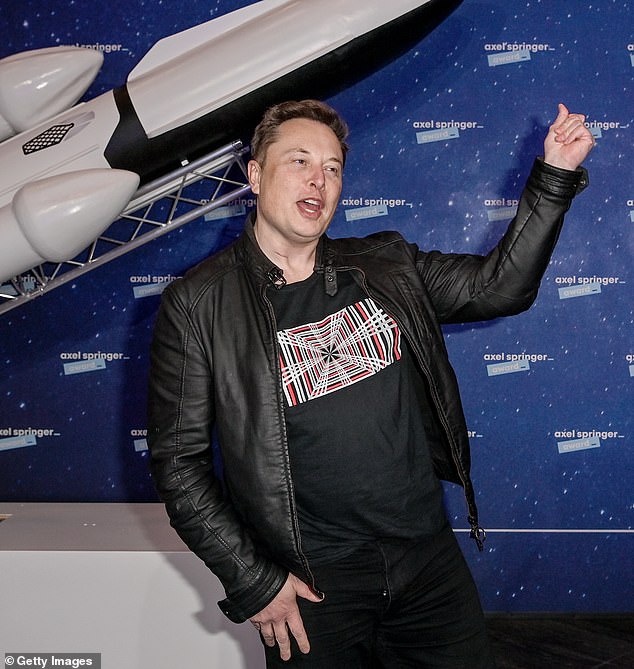 The Tesla CEO became Twitter’s majority shareholder on March 14, but failed disclose his stake in the social media giant by the March 25 deadline, violating a 50-year-old SEC law that requires investors notify the regulator once they surpass a 5 percent stake in a company. Musk filed ownership disclosure documents on Monday.

Musk then continued to purchase Twitter stock at approximately $39 per share during the period of omission, SEC filings obtained by DailyMail.com revealed. After his disclosure on Monday, Twitter stock prices surged roughly 30 percent to above $50 per share, allowing the billionaire to reap millions in profit.

Additionally, legal and securities experts allege the SpaceX CEO, who was named to Twitter’s Board of Directors on Tuesday, could be under fire for also filing a misleading SEC report claiming to be a ‘passive investor’ in the company, meaning he had no plans to change or influence the company. Musk did file proper documentation for active investors afterwards.

‘I really don’t know what’s going through his mind,’ University of Maryland finance professor David Kass told The Washington Post Wednesday. ‘Was he ignorant or knowledgeable that he was violating securities law? Whoever was handling the trades for Musk should have known.’ 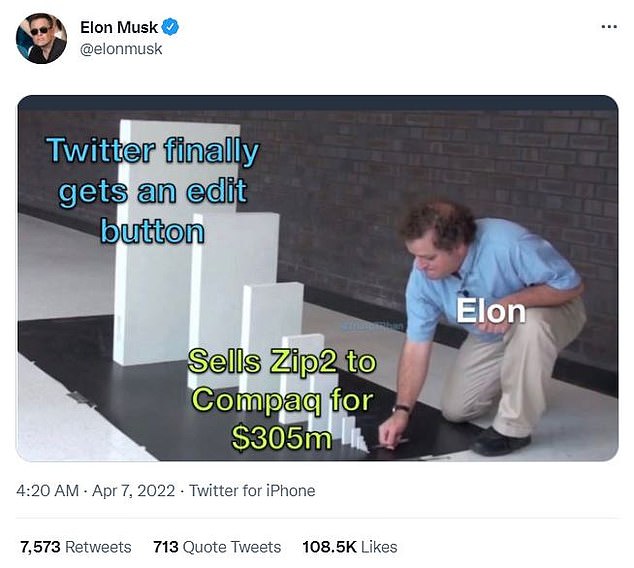 Some allege the SEC may look to make an example out of Musk by issuing him a penalties worth hundreds of thousands of dollars, a financial slap on the wrist for the entrepreneur who is the world’s richest person with a net worth pegged by Forbes at $290billion.

The SEC could also argue Musk needs to give up the theoretical profit – assumed value of a position during a specific measure, which in this case would be time – earned during his period of omission, but most experts think that is unlikely.

‘[The SEC] would have to be really angry with him to try that because they would have a good chance of a court rejecting that argument,’ Adam Pritchard, a professor of securities law at University of Michigan’s law school, argued.

However, SEC Chair Gary Gensler has been trying to tighten regulations surrounding investor disclosure and even proposed new rules that would drop the required threshold allowed to reveal one’s stake from 10 days to five.

‘It is important that shareholders get that information sooner,’ Gensler said in a statement obtained by the newspaper. 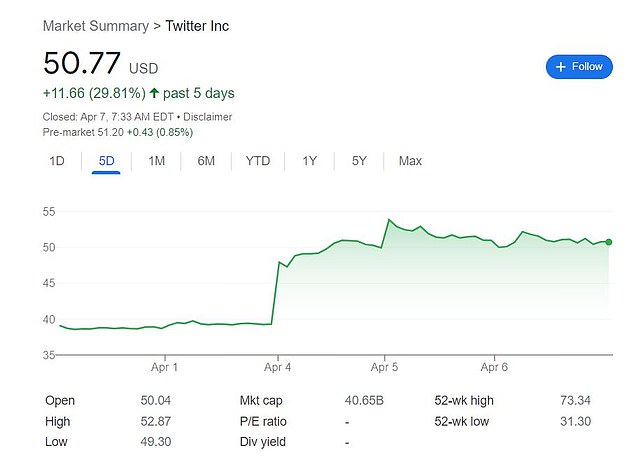 Twitter stock prices surged roughly 30 percent, to above $50 per share, after news of Musk’s board membership and stake in the company went public, allowing the billionaire to reap approximately $156million in profits 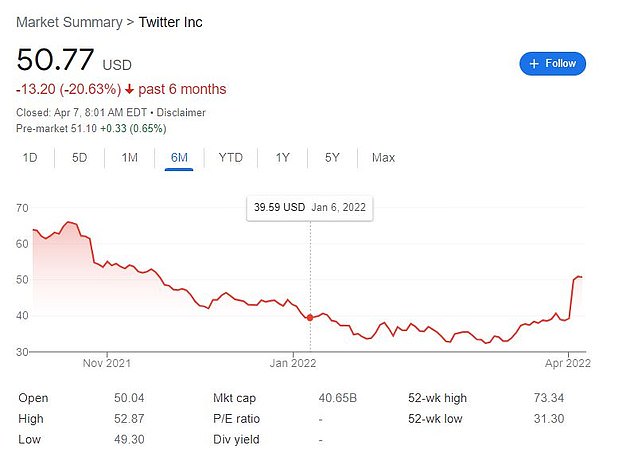 Twitter closed at its 2022 low point on March 7 when shares were trading at $32.42 each. The shares had ended January at $37.51 and have significantly surged in the wake of the news surrounding Musk’s involvement with the platform

Additionally, Tuesday’s filing chaos would not mark the first time Musk apparently violated SEC rules, which some analysts allege could lead the regulator to ‘tell a court that he’s a recidivist violator of the securities laws and that he needs to be dealt with harshly.’

The regulator said last month it has told Musk’s and Tesla’s counsel that staff are conducting an investigation relating to potential federal securities law violations.

In 2018, the agency entered into a consent decree with Musk after he allegedly mislead investors by tweeting he had ‘funding secured’ to take Tesla private. Musk paid a $20million fine, agreed to step down as chairman and have his tweets pre-approved by lawyers.

The SEC is also investigating Musk’s Nov. 6, 2021, tweet asking his followers whether he should sell 10 percent of his Tesla stake. The regulator in February said it was probing a stock sale by Musk’s brother a day before that tweet.

Musk asked the SEC to scrap his consent decree last month, according to the newspaper.

Twitter announced Tuesday morning that Musk would hold a seat on the company’s board of directors until the platform’s 2024 annual shareholders meeting.

In exchange, Musk – either alone or as a member of a group – is not allowed to push his stake in the company past 14.9 percent during the duration of his board membership and for 90 days after.

The billionaire also became Twitter’s majority shareholder after he acquired 73.5 million shares of the platform, worth about $3billion. 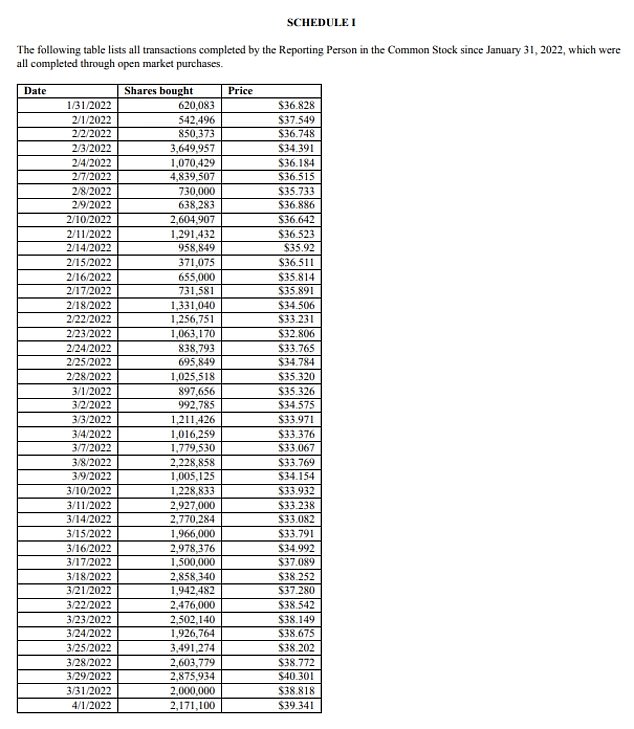 The billionaire also became Twitter’s majority shareholder after he acquired 73.5 million shares of the platform, worth about $3billion. An SEC filing (pictured) revealed that Musk began purchasing Twitter stock on January 31 and continued to buy shares during every trading session through April 1

He began purchasing Twitter stock on January 31 and continued to buy shares during every trading session through April 1, according to a SEC filing obtained by DailyMail.com.

His largest purchase occurred on February 7 when he acquired more than 4.8 million shares, worth approximately $176million.

Twitter closed at its 2022 low point on March 7 when shares were trading at $32.42 each. The shares had ended January at $37.51 and have significantly surged in the wake of the news surrounding Musk’s involvement with the platform. On Thursday, shares opened at $50.77.

Analysts allege it is unclear why Musk failed to reveal his stake in the company by the SEC deadline, noting the $156million in gains is insignificant for the PayPal co-founder. The billionaire has not responded to requests for comment.

It is also unclear why Musk would initially file a passive investor report to the SEC when he planned to take an active role in the company, which he has not been shy about.

‘Looking forward to working with Parag & Twitter board to make significant improvements to Twitter in coming months!’ Musk tweeted on Tuesday after the social media giant announced his board membership.

On Tuesday, after his board membership was announced, Musk said he was ‘looking forward’ to making ‘significant improvements’ to the platform

Musk has been highly critical of Twitter and its policies of late, having even accused the company of failing to adhere to free speech principles.

On March 25, Musk tweeted a poll: ‘Free speech is essential to a functioning democracy. Do you believe Twitter rigorously adheres to this principle?’

A day later, Musk, a prolific user of Twitter himself, said that he was giving ‘serious thought’ to building a new social media platform.

Analysts claim his comments about the social media platform were market-moving and made during the period in which he failed to disclose he held stake in the company.

Although he could face consequences from the SEC, individual Twitter shareholders have no grounds to sue Musk because public disclosure is a regulatory requirement and not something that is legally owed to shareholders.