Super Eagles striker, Victor Osimhen spared some moments as he took pictures with Cristiano Ronaldo and Gianluigi Buffon after Napoli’s victory over the old Ladies yesterday.

Victor Osimhen, after the match, took turns in taking a picture with Ronaldo and Buffon in  Juventus’ dressing room. The duo, according to Osimhen is his idols whom he watched while playing on the streets of Lagos. 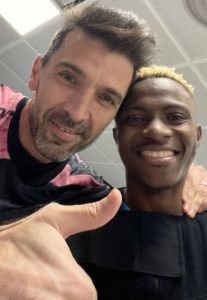 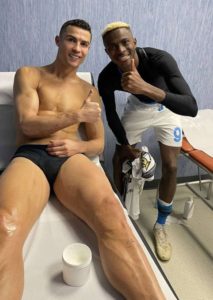 The Nigerian striker is yet to find the back of the net since he returned from injury and he was almost anonymous in the 1-0 win over the Champions courtesy of Lorenzo Insigne’s 31st-minute penalty.

However, Victor Osimhen will look to get back scoring for the Naples-based side with the return of the UEFA Europa League on Thursday.

Napoli will play away to Granada in the first leg of the round of sixteen.