The hunger for goals of fast-rising Lorient and Nigerian striker, Tarem Moffi continues to grow bigger as the days go by.

Tarem Moffi was on target not just once but twice as he helped Lorient secured a vital point in a 2-2 away at Monaco.

The 21-year-old striker scored the first goal via a 7th-minute penalty before adding the second in the 62nd minute. His brace could have secured maximum points for his team but Wissam Ben-Yeddar, who also scored a brace restored parity in the 93rd minute. 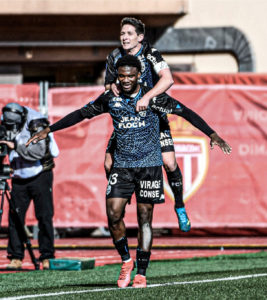 Tarem Moffi has now scored 9 goals in 21 appearances this season for both Lorient and his former side, Kortrijk in the Belgian Jupiler League.

Lorient are currently in 17th position with 23 points after 24 games in the French Ligue 1.