See why Josep Bartomeu resigned as President of Barcelona

Bartomeu’s resignation was confirmed via a statement on the official Barcelona website.

The message said, “I am here today to inform you of my resignation and that of the rest of the Board of Directors.

“This is a well-considered, calm, consensual and collective decision by my fellow directors who have accompanied me over recent years in a loyal and committed fashion with regards to the project and the Club, and who have made so many sacrifices thinking always of Barça.” 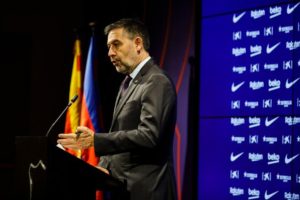 He said on Twitter, “Today I have announced my resignation and that of the rest of the FC Barcelona Board of Directors. Here I explain my reasons and briefly look back at these years in charge. I am proud to have served the club. Visca el Barça i visca Catalunya!

In the link, Bartomeu explained that his resignation was because his family and colleagues were threatened.

He said, “What we have experienced these last few months exceeds any limit. Me, my family and colleagues have been insulted and threatened.”