Osimhen was sent off in Napoli’s 1-0 away win against Real Sociedad in an Europa League encounter played on Thursday, October 29th.

The first half ended goalless but Napoli went ahead in the 56th minute when Matteo Politano converted a ball by Tiemoue Bakayoko.

In the 81st minute, Osimhen received his a yellow card for a challenge as a caution. 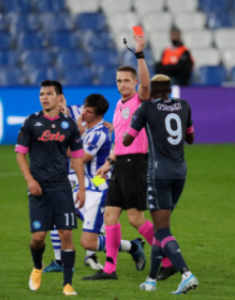 Napoli held on to win the game but Osimhen will miss their next game against Rijeka scheduled for Thursday, November 5