Security situation in country continue to deteriorate and even the political elites are not being spared.

Gunmen in the early hours of Saturday attacked the country home of the Governor of Imo State, Hope Uzodinma.

The gunmen, who invaded the governor’s house in Omuma in the Oru East Local Government Area of the state, also killed two security men on duty before torching the house.

It was gathered that one of the security men killed was an operative of the Nigeria Security and Civil Defence Corps.

According to a source, who pleaded anonymity, cars parked inside the compound and part of the building were torched. 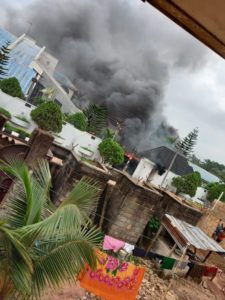 The source said security men on duty repelled the gunmen, leading to the death of the two cops.

The State Commissioner for Information and Strategy, Declan Emelumba, confirmed the incident when our correspondent contacted him.

He also confirmed that two security men at the governor’s house lost their lives during the attack.

The Southeast region in the past few weeks has been quite volatile with attacks on police formations especially and facilities.

In as much as the Eastern Security Outfit has been formed, attacks has not stopped unfortunately.